The Seven Chakras and Seven Stages of Human Life 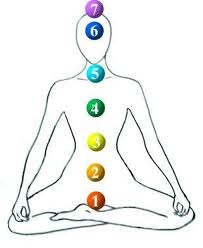 The main nadis (subtle energy channels of the body) Ida, Pingala and Shushumna run along the spinal column in a curved path and cross one another several times. At the points of intersection they form strong energy centers, wheel-like vortex known as chakras. A chakra is a center of activity that receives, assimilates, and expresses prana (life force energy).

There are seven primary chakras:

Each chakra has a specific purpose and area of influence. We are meant to develop the energy of each chakra, as we grow, in order to fulfill our assignment in life. Each chakra corresponds to a stage of life.

1. First stage (birth to 14 years) is the Survival stage.
In this period of life we tend to live mainly from the first chakra, which is associated with the earth element, survival, and saving recourses. Located at the base of the spine (between the anus and genitals) the Muladhara chakra gives us great stability, when it is in balance. It is affected by our relationship to our family of origin, since at this age we are meant to be guided by our parents, teachers, and elders.

[sociallocker]2. Second stage (15 to 28 years) is the Ego stage.
As we move into this stage we begin to experience the energy of the next chakra, which is associated with the water element. Located in the sacrum the Swadhisthana chakra reveals the early stages of our evolution, reflecting the elemental human affairs like money, sex, and power. We begin to experience our individuality and sexuality. Many people become stuck within second chakra in their pursuit of sex, money, and power. It is said that we require many rebirths to transcend this region, with its seductive urges. A life of indulgence and irrelevance makes it hard to move on to the next level, yet once this difficult crossing has been achieved, we become familiar with the higher vibration of the third chakra.

3. Third stage (29 to 42 years) is the Mental stage.
The third chakra rules the mind and represents the fire element. Centrally positioned in the region of the navel and solar plexus, the Manipura chakra keeps the elements of the first and second chakras in check. Confidence, discipline and self-esteem are given us through this chakra, when it is in balance. Mental concepts that reside in the third chakra are of addictive nature, which makes it extremely difficult to move the energy to the fourth chakra. The evolution to the heart chakra is considered to be one of the most hard of human accomplishments.

4. Fourth stage (43 to 56 years) is the Intuitive stage.
In this period of life we receive the sacred opportunity to ascend into the vibration field of the heart chakra, into spiritual maternity. From this point, the human journey quickens its pace, resonating with the higher rhythms of the spirit.
The fourth chakra resides slightly to the right of our biological heart and is associated with the air element. Reclaiming the vibrations of the Anahata chakra marks a profound leap in our evolutionary growth. The sonic energy of the heart awakens along with the intuition and spiritual consciousness. The fourth chakra serves as the gateway between the more basic survival oriented impulses of the lower three chakras and the spiritual aspirations of the highest three. Accordingly to it the fourth stage of life represents a major transition in our inner orientation: from obsession with the self to compassion for others.

5. Fifth stage (57-70 years) is the “Inner Song” stage.
Once the fourth stage has been accomplished, ascendance into the fifth chakra is almost guaranteed. By this time, the rhythms of the spirit have gained tremendous momentum, generating the upward force that moves directly into the fifth stage of life. The corresponding Vishuddha chakra is located at the base of the throat and associated with the element of space. The fifth stage gives us the power of the voice, self-expression and creativity.

6. Sixth stage (approximately 71 to 84) is the Visionary stage.
Unlike the previous stages, we can come into the sixth stage at any age; attending the sixth chakra depends solely on our own inner awakening. This can happen at any time, once we become aware of our ability to be conscious. The Ajna chakra is located at the base of the brain (the so called “third eye”) and is said to be the home of the Ahamkara (sense of separate self or ego). Once we are able to dissolve the wrong assumption that we are separate from the unitive consciousness, we can begin to merge with this consciousness, while still in a material, tangible form.

7. Seventh stage (approximately 84 to 98) is the Infinite Consciousness stage.
The seventh chakra is located just above the crown of the head, near the pineal gland, outside the physical body. Reaching the seventh stage of life we have the opportunity to enter into a union with the One Spirit. The physical age range of eighty-four to ninety-eight is only a metaphoric guideline. Ageless human consciousness is a state of being, which is called Sat Chit  Ananda: ever existing, ever conscious, ever complete.

The cosmic vibrations within the chakras may remain dormant through countless rebirths, or they may open gradually over a number of lifetimes. The everyday practices (Sadhanas) we undertake enable us to gradually become aware of the chakras’ vibration powers and awaken our spiritual energy (Kundalini).
You can find more on chakras in the following books: Bri. Maya Tiwari “The Path of Practice: A Woman’s Book of Ayurvedic Healing

TODAY’S TIP: The seven chakras correspond to the seven notes of the Vedic musical scale and the seven colors of the rainbow that ties the life force of earth to heaven.