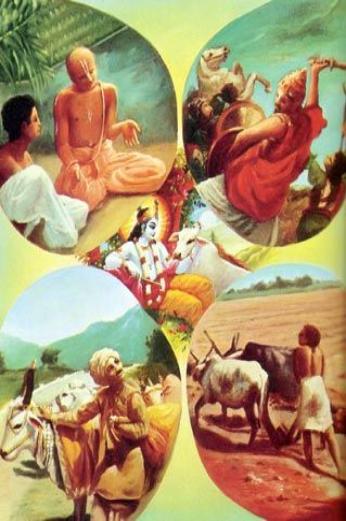 Vedic society is based on four Varnas (classes). Let’s use the word class since caste has been negatively tinged. Four Varnas are: Brahmins, Kshatriyas, Vaishyas, and Shudras. The varnas were created based on four elements: three gunas of material nature and the law of karma (See Gunas; The law of Karma).

The four-fold order looks as following:

Brahmins: Sattva guna predominates in Brahmins – and they are assigned the tasks (karma) of study and teach sciences, serve God in the altar, teach future priests, ask for and dispense charity.

Kshatriyas: Rajas guna predominates in Kshatriyas – sattva guna is secondary. Their karma is to be warriors, rule, protect citizens, regulate justice,  and show bravery and confidence.

Vaishyas: Rajas guna also predominates in Vaishyas – tamas guna is secondary. Their karma is to be farmers and traders.

Shudras: Tamas guna predominates in Shudras – rajas guna is secondary. Their karma is to serve others and always have a superior.

Four Varnas are compared to human body. Brahmins are the head, Kshatriyas-the arms, Vaishyas- the stomach, and Shudras- the legs. In human history there are plenty of examples when head was replaced with arms, stomach or even legs and the results were poor. Only when all parts of the body function in harmony, without envy or conceit, can the whole organism and all its parts be satisfied.

Can castes be inherited or changed?

One belongs to one or another varna only and solely according to his qualities and inclinations. One may have born into Brahmin caste, yet indulged in work of trading. As per Vedas he would be considered not a Brahmin but a Vaishya. Similarly one born in Shudra caste yet indulged in protecting the country would be treated at par with Kshatriya.

Dividing into varna’s is true for all societies, both old and modern, since  people  are naturally prone to one of four activities in life and  are happy in doing this specific range of work. One chooses to do kshatriya’s, vaishya’s or shudra’s job not because he is not able to find a better place, but because he follows his inclinations and considers that job the only choice that makes him happy.

Belonging to one or another class or varna  involves certain privileges and responsibilities which a person happily agrees to deal with.

To belong to a varna  one has to possess certain qualities.

Qualities of the four Varnas:

Peacefulness, self-control, austerity, purity, tolerance, honesty, knowledge, wisdom, religiousness, temperance, satisfaction with that what one has,ingenuousness, mercy, and devotion to God are the natural qualities of work for the Brahmins.

Heroism, power, determination, resourcefulness, courage in battle, generosity, modesty, magnanimity and leadership are the natural qualities of work for the Kṣhatriyas (warriors, leaders and high officials).

Piety, devotion to the teacher and God, diligence, thrift and protection of cows are the natural qualities of work for the Vaishyas.

Obligingness, diligence, neatness, truthfulness, piousness, and dedication to the master are the shudra’s virtues. Shudras are not ones who work for others because they can’t find some job as a Kshatriya or Vaishya. He just truly enjoys working with his hands and creating things. He also prefers that someone else organizes and takes responsibility for the business.

1. By following his qualities of work, every man can become perfect.

2. It is better to engage in one’s own occupation, even though one may perform it imperfectly, than to accept another’s occupation and perform it perfectly. Duties prescribed according to one’s nature are never affected by sinful reactions (bad karma).

3. Every endeavor is covered by some fault, just as fire is covered by smoke. Therefore one should not give up the work born of his nature, even if such work is full of fault (for example a warrior killing an enemy in battle).

4. One who is self-controlled and unattached and who disregards all material enjoyment can obtain, by practice of renunciation, the highest perfect stage of freedom from reaction.

How  to find one’s mission.

The varna or the order to which we belong is independent of sex, birth or breeding. A varna is determined by temperament and vocation – not by birth or heredity.

If you don’t know what is your destiny and what job to choose, it is recommended humbly do every job you are asked for; and God will give you an occupation that is meant for you. Never should we be arrogant and waste time waiting for the job we think we “deserve”, while our family is in need.

In order to be born with qualities of one of the three upper classes one should undergo all purifying procedures starting from the time his parents are planning his conception. In that case he is considered born from Demi-God Brahma and is called twice-born. Since no one is doing it nowadays, the Vedic scriptures state, that  initially everyone is born as Shudra, and only after developing certain qualities he would qualify for Brahmin, Kshatriya, or Vaishya.

Untouchables, according to Vedas, are thiefs and other criminals; they must be avoided..

According to the Mahabharata, the whole world was originally of one class but later it became divided into four divisions on account of the specific duties. Later the varnas were divided into jatis (smaller bundles) and each jati assigned a particular vocation, with each jati having a headman with the authority to punish offenders. No punishment was harsher or more humiliating than excommunication. Artificially the borders between the jatis were built, so they became the fact of heredity. This totally contradicts the Vedic order, when people freely joint one or another varna according to their qualities.

In the last 150 years Indian movements arose to throw off the economic and political yoke of an inherited class system that emerged over time, and replace it with true Varnas as described in the Vedas.

TODAY’S TIP: The present morbid condition of India broken into castes and sub-castes disagrees with the unity taught by the Vedas, which stands for an organic as opposed to an atomistic conception of society.