“A mantra is mystical energy encased in a sound structure and each mantra contains within its vibrations a certain power. But of all mantras, the Maha-mantra (the Hare Krishna mantra) has been prescribed as the easiest and surest w 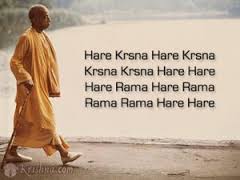 ay for attaining God Realization in this present age.”
George Harrison (1943-2001), in his autobiography I, me and Mine.

We the people
We are embodied souls and our mission is far above of working eighteen hours a day and then spending all that money on doctors’ visits as a consequence. Our goals should be beyond the four basic pursuits such as sleep, food, mating, and defense, since these occupations do not need a human body type to be fulfilled. Animals are much more successful in these pursuits. A bear hibernates many months in a row. A pig enjoys a much bigger range of food, from gourmet meals to leftovers, and is very happy even eating feces. Monkeys have long lasting sex many times during a day. A tiger defends itself without guns and knives. Since a human body can’t fulfil these tasks as effectively as animals do, it is obvious that we were created for something greater than just to eat, sleep, mate, and defend ourselves.

Ask questions
Sages tell that it is a unique godsend to be embodied as a human being. We need to use this chance and find answers to questions that only humans can ask: Who am I? What is the purpose of my life? Who created everything? Who takes care of everything? Why do suffering, unhappiness, diseases and death exist? Where can I find everlasting, perennially growing happiness?

Find answers
Vedas explain that the material world exists in everlasting cycles of creation, existence, development, decline, and destruction. We, as immortal souls, are spiritual, non-material, and have nothing to do with this cycling. Our purpose is to return to where we belong – the spiritual world – and forget the nightmare of perpetual births and deaths.

Vedas also show a way to liberation. It is different for each of the four epochs (yugas) of a Big cycle. This method of liberation is called Yuga Dharma. (See also Cycles of the Material World; Vedas about the End of World; Vedas on Cosmos).

Different ways to God in different epochs
In Satya yuga (Golden Age) when living beings were able to live 100,000 years and their ability to concentrate on spiritual objects was incomparable to ours, a way back to God was meditation. At this time, people were able to control their mind (manas) with intellect (budhi) and concentrate on the highest reality.

In Tretha Yuga (Silver Age) men lived 10,000 years and their abilities and power declined to a degree. Recommended means to comprehend God became yajna (a ritual of offerings accompanied by chanting of Vedic mantras).

In Dvapara Yuga (Bronze Age) human’s life lasts 1,000 years (Biblical Adam lived 930 years, Noah-950). The ten patriarchs (excluding Enoch) who preceded the Great Flood lived an average of 912 years. Lamech died the youngest at the age of 777, and Methuselah lived to be the oldest at 969. At that time, people used complicated temple worship to unite with the Creator.

During the 1,000 years following the Flood, however, the Bible records a progressive decline in the life span of the patriarchs, from Noah, who lived to be 950 years old, until Abraham at 175. In fact, Moses was unusually old for his time (120 years) because when he reflected on the brevity of life, he said: “The days of our lives are seventy years; and if by reason of strength they are eighty years, yet their boast is only labor and sorrow; for it is soon cut off, and we fly away.” (Psalm 90:10)

In our epoch of Kali Yuga (Iron Age or Age of quarrel) which began about 5,000 years ago, a human life span is supposed to be 100 years. Nowadays, however, almost no one lives until 100 years of age and our ability to concentrate on an object is almost gone. The life of modern men is full of contradictions and worries, and they are not interested in spirituality or ascetics.

It is predicted that along with degradation of humankind, many inauspicious events will take place. Conversely, there is one very auspicious aspect that makes it desirable for many souls to be embodied on our planet in this period.

The uniqueness of this time is that as men’s qualities deteriorate, Divine becomes more and more merciful and indulgent to them. The way to liberation in Kali yuga is easy in comparison to the other epochs – praising of the Holy Names.

All main religions speak about the importance of chanting Holy Names:
The Koran teaches about the ninety nine Names of Allah. The Old Testament says “Our help is in the name of the Lord.” (Psalm 124:8) The New Testament implores “… let us continually offer to God a sacrifice of praise —the fruit of lips that openly profess his name.” (Hebrews 13:15)
If someone can provide similar quotes from the Torah or any other Holy Scriptures, I’ll gratefully post them here. 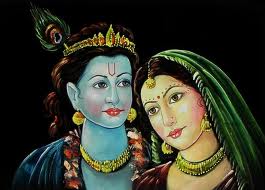 In Sanskrit such a praising is called Hari-nama-sankirtana, chanting a holy mantra. This sound is not created in the material world but imported from the spiritual reality.

Vedas teach that Hare Krishna Maha mantra contains the Holy Names that are intended to be chanted in our epoch as a vehicle to freedom from all subtle and gross material conditions.

The meaning of Hare Krishna mantra

According to A. C. Bhaktivedanta Swami Prabhupada, Harā refers to “the energy of God” while Krishna and Rama refer to God himself, meaning “He who is All-Attractive” and “He who is the Source of All Pleasure”. Rama can refer to Ramachandra or to Krishna as Radha-Raman, another name of Krishna meaning beloved of Radha.

After searching through all the Vedic literatures, a method of religious piety for this age as sublime as the chanting of Hare Krishna cannot be found.

Revelation of the Maha mantra

It is clearly indicated that in Kali Yuga, the only method of salvation is chanting the holy name of God. However, the most powerful mantra for salvation was hidden in confidentiality until this age. It wasn’t until the late fifteenth century that the Maha mantra was openly revealed by Lord Caitanya Mahaprabhu. Typically, the Lord does not incarnate on Earth during Kali Yuga, until the very end. However, this Kali Yuga was especially fortunate to have Lord Caitanya Mahaprabhu’s incarnation of gold appear on earth. Through His mission to spread the movement of devotional service in degraded age, He brought the Hare Krisna Maha mantra openly for all to benefit from.

This mantra is very simple. You can chant it anytime, anywhere. Dedicate at least 15 minutes per day for this mantra repetition. Sit quietly in a comfortable position. You can chant it silently in your mind but chanting out loud is preferable, since a spoken sound purifies our intellect. Repeat it with full awareness of its meaning.

TODAY’S TIP: The spiritual world is called Vaikuntha, which means “without anxiety.” In the material world, on the contrary, everything is full of anxiety (kuntha). The treasure of Maha mantra descends to the material world through sound, a vibration which connects the Higher Reality and this world, freeing a conditioned soul from anxiety.