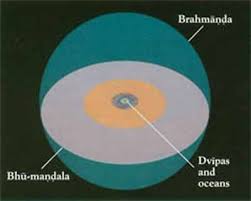 The flat Earth idea is usually equated with primitive and
pre-scientific ideas. A common expression to equate certain ideas with stupidity is to say, “people used to think
the world was flat.” In most people’s minds, a flat Earth conjures up pictures of boats falling off the edge.
However, almost all ancient cultures and religions
(including the Vedic culture) taught that the world was flat
and motionless, and that the sun and moon rotated around
the stationary Earth. This system is referred to as the
geocentric system. The opposing idea of Earth as a
moving planet orbiting the sun began to take hold in the
modern era with Copernicus (1473-1543), Galileo (1564-
1642), and Newton (1642-1726). This movement of the
Earth around the sun is referred to as the heliocentric
system.

In just a few years, there has been an almost instant
revolution in ideas about the flat Earth with an
accompanying explosion of interest in the concept. It has
been perhaps one of the most popular internet topics and
will continue to gain momentum in the coming years.

Usage of the term:
Flat Earth does not mean a landscape devoid of highlands
and mountains; it is a term used to distinguish the idea of Earth lying on a horizontal plane, from the opposing and
more widely accepted idea of Earth being a rotating globe
floating in space.

What does Earth look like from the Vedic perspective? 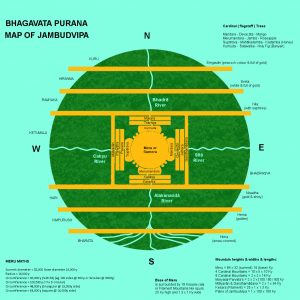 Srimad-Bhagavatam (the essence of all Vedic literature),
contains very detailed descriptions of the universe,
including the nature of life in various locations.
Srimad-Bhagavatam describes our universe (not earth)
as being round in its shape. The diameter of the universe
is calculated to be 4 billion miles, which is not very big
according to modern calculations. The Vedas also teach
that there exist innumerable universes and that life is
present in multi-various forms throughout these multi-
universes. The total number of these collected universes
is of inestimable quantity. Despite the inconceivable
number of material universes, the entire material world is
only a fraction of the spiritual world from which we have
fallen. In the image below we see a simplified depiction of
our round universe (brahmanda) divided across the middle
by a flat plane called Bhu-mandala. Bhu-mandala literally
translates as Earth circle or Earth sphere.

Think of cutting a large watermelon in half. The flat circular
shape of the sliced melon is comparable to the Bhu-
mandala. It has many features including various divisions

of land and oceans stretching for millions of miles along its
four billion mile diameter. Srimad-Bhagavatam’s fifth
canto provides a description of the varieties of geography,
life, and spiritual culture of the people situated in these
different areas of the greater Earth.

Situation of Earth in Bhu-mandala.
According to Srimad-Bhagavatam, the places that we
know as Earth: America, Europe, Africa, Asia, Australia,
etc., are only a small part of a huge land mass to the north
of us called Jambudvipa; which is the central island of
Bhu-mandala, the great cosmic sphere that stretches
across the universe. In this way, Earth is part of
Jambudvipa and Jambudvipa is in the center of Bhu-
mandala.
Bhu-mandala contains seven island and seven oceans
that stretch for millions of miles along it. All of these areas
are inhabited by human life.

The salt water ocean is described in Srimad-Bhagavatam
as being the same breadth as Jambudvipa, that is,
800,000 miles across. The salt water ocean completely
surrounds Jambudvipa in a great circle. From our Earth, if
we go north we would reach Jambudvipa in a relatively
short distance. But going in a southerly direction would
mean continuing for another 800,000 miles on the salt
water ocean until one reaches Plaksha Dvipa which is the
next concentric island surrounding Jambudvipa on the
plane of Bhu-mandala.

The prominent land features of the Bhu-mandala are
commonly acknowledged as the sapta-dvipa or seven
islands and their surrounding oceans. These seven circles
of various islands and oceans continue for millions of
miles along the Bhu-mandala. A description of the
geography and spiritual life of the people living in these
areas is described in the Fifth Canto of Srimad
Bhagavatam and other Vedic texts.

surrounded by the saltwater ocean. This ocean also has a
breadth of 800,000 miles and completely surrounds
Jambudvipa in a huge circle. Past that, there is another
concentric circle representing a further island (dvipa). A
series of these concentric circular islands and oceans
continue for millions of miles along this central part of the
4 billion diameter plane of Bhu-mandala. Eventually one
comes to the shell of the universe which, as previously
mentioned, is spherical and encloses everything within it.

Jambudvipa is divided into nine regions, with Bharata
Varsha in the South. Bharata Varsha is the Sanskrit name
of our own locality. Basically, the inhabitants of the rest of
the Vedic universe refer to our Earth as part of Bharata
Varsha which is one of the nine varshas (divisions) of
Jambudvipa

Bharata Varsha has a total length of 72,000 miles and, like
Jambudvipa itself, is divided into nine regions of which our
Earth is only one part. Bharata-varsha is described as bow
shaped; the south, east and west form the bow shape (the
rounded coastal area), and the Himalaya Mountain forms
the bow’s string in the north. This Himalaya is not the one
we know in India. This Himalaya rises to a height of
80,000 miles high. This Himalaya mountain range
separates Bhärata-varña from the neighboring
Kimpurusha-varsha.

Conclusion:
According to the Vedic knowledge the Earth is not a globe
rotating in space, but is part of an expansive land area
called the Bhu-mandala. Earth is located in an area called
Bharata-varsha which is a division of Jambüdvépa, the
central island of Bhu-mandala. In practical terms, we are
part of an 800,000 mile island inhabited by humans which
is only one of many such islands stretching across the
center of the universe.

Other destinations of our universe:
The different planetary systems of the universe (fourteen
in all) are not to be construed as planets as we generally
understand them, but are more like vast expanses or

levels that are situated above and below the Earth (or the
plane of Bhu-mandala), and which facilitate the different
desires and karmas of the living entities within their
material world. All of these places have diverse
environments and are inhabited by various forms of life.
The Srimad-Bhagavatam describes the varieties of
spiritual culture (or lack of it) throughout these regions. A
description of different kinds of hellish “planets” is also
given in chapter twenty-six.

This subject is placed in the Srimad-Bhagavatam and
other Vedic texts for a reason. The reason is so that living
entities get to learn about the various options and
destinations available to them whilst residing in the
material world. According to one’s karma and desire, the
soul will transmigrate from one lifetime to another and be
placed in various situations throughout the universe.
Knowledge of karma, reincarnation, and cosmography
helps one to live in such a way so as to choose favourable
destinations rather than being forced to accept
unfavourable ones as a result of ignorantly neglecting or
violating spiritual laws. This is a worldview that obviously
takes into account many lifetimes.

The essential message of the Srimad-Bhagavatam,
however, is to persuade living entities to give up their
fascination and attachment to these temporary situations

within the material world and to work towards re-
establishing their eternal relationship with Krishna through
the process of bhakti-yoga. By this process, one can gain
liberation from the cycle of repeated birth and death and
ultimately return back to the Kingdom of God, the original
home of the soul.

TODAY’S TIP: It is interesting timing that this resurgence
in thinking about the flat Earth is occurring simultaneously
with the construction of the Mayapur Vedic Planetarium,
whose cosmology clearly describes an expanded flat
Earth. The Mayapur Vedic Planetarium is based on Vedic
cosmography and was one of Srila Prabhupada’s main
projects to counteract the prevailing materialistic
worldview of life and the cosmos. After an initial slow start,
the construction work of the Mäyäpur Vedic Planetarium is
now well under way and, upon completion, will be an
astonishing example of the resurgence of Vedic culture in
the modern era.