The Brain of an Older Person is More Productive 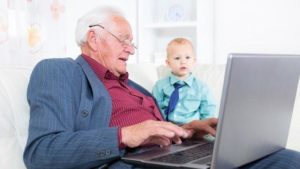 The director of the George Washington University College of Medicine reports that the brain of an elderly person is much more flexible than is commonly believed. At this age, the interaction of the right and left hemispheres of the brain becomes harmonious, which expands our possibilities. That is why among people over 60 we can find many individuals who have just started their creative activities.

Of course, the brain is no longer as fast as it was in youth. However, it wins in flexibility. That is why, with age, we are more likely to make the right decisions and are less exposed to negative emotions. The peak of human intellectual activity occurs at about 70 years old, when the brain begins to work at full strength.

Over time, the brain increases the amount of myelin that facilitates the rapid passage of signals between neurons. Due to this, intellectual abilities are increased by 300% compared to the average.

The peak of active production of myelin occurs at 60-80 years of age. Also interesting is the fact that after 60 years, a person can use both hemispheres at the same time. This allows us to solve much more complex problems.

Professor Monchi Uri from the University of Montreal believes that the brain of an elderly person chooses the least energy-intensive path, cutting unnecessary and leaving only the right options for solving the problem. A study was conducted, in which different age groups took part. Young people were confused a lot when passing the tests, while those over 60 made the right decisions.

Now let’s look at the characteristics of the brain at the age of 60-80. They are really promising.

1. The neurons of the brain do not die off, as someone may think. However, connections between them may be lost if a person is not engaged in mental work.

2. Absent-mindedness and forgetfulness appear only due to an overabundance of information. Therefore, it is important not to focus on unnecessary things.

3. Beginning at the age of 60, when making decisions, a person uses not one hemisphere, like young people, but both at the same time.

Conclusion: if a person leads a healthy lifestyle, moves, is physically and mentally active, intellectual abilities DO NOT decrease with age, but only GROW, reaching a peak by 80-90 years.

Instead of being afraid of old age one should strive to develop intellectually. Learn new crafts, try to play musical instruments, paint pictures, dance! Take an interest in life, meet and communicate with friends, make plans for the future, travel as best you can. Do not forget to go to shops, cafes, concerts. Do not lock yourself alone – it is destructive for anyone.

Being young doesn’t mean acting like a teenager. This means using all knowledge and experience to give life a higher meaning. This does not mean ignoring the fact that any life, productive or not, long or short, will eventually end. Therefore, as soon as possible, we must find out who we are, who is the source of everything that surrounds us, and what is the relationship between us and this source. This topic will surely increase our mental potential.

A large study in the United States has found that:

▪The most productive age of a person is from 60 to 70 years;

▪The average age of Nobel Prize winners is 62;

▪The average age of the presidents of the 100 largest companies in the world is 63;

▪The average age of priests in the 100 largest US churches is 71;

▪The average age of Popes is 76 years.

TODAY’S TIP: These studies show our potential only and do not guarantee a bright and harmonious old age to everyone. However, knowing this, we can now choose the lifestyle and mindset that will bring us closer to a long, productive life.