Cancer is probably the most feared disease in the modern world, although heart disease still comes first in the number of fatalities. Every time someone is diagnosed with cancer two questions arise: “Why?“ and “What to do?”.

WHY?
All human beings generate new growths regularly, but the immune system recognizes them as undesirable and promptly destroys the foreign entities. Should the immune system fail in that first mission, cancer cells continue to reproduce themselves and the tumor grows. The main point of Ayurveda is that there must be a break in the life – force, known as prana (or Qi in Chinese medicine) for a substantial period of time before a cancerous growth can begin in the body. Many studies have linked cancer to diets high in protein, fat, processed food; and to chemicals in our food chain and daily lives. The mind must be disturbed too. A negative self image and suppressed or negative emotions can be a contributing factor in developing the disease.

WHAT TO DO?
Disease clearly shows us that it is time to change the life style and thinking patterns that have resulted in illness. Toxins must be removed, digestive power normalized, and individual constitutions (doshas) balanced.  Diet should become low in animal protein if at all, high in organic whole grains and vegetables, and free of processed food. When digestion is functioning well, immune modulating herbs can be taken to strengthen the immune system. Daily exercise and meditation are very important factors. All of these steps should be taken before submitting yourself to chemotherapy or surgery. 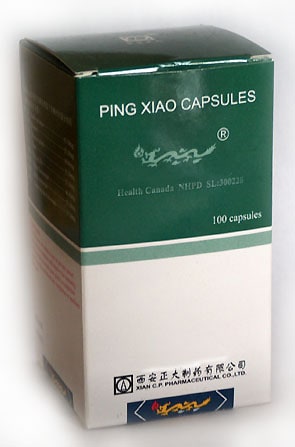 Canelim (Ping Xiao) is a time – tested herbal remedy which restores the body’s inborn intelligence and healing power. It is officially approved by the Chinese Drug Administration as a drug for cancer and is successfully used in many Chinese hospitals as a treatment for the broad range of different kinds of cancer including Prostate Cancer, Bile Duct Cancer, Gallbladder Cancer, Bone Cancer, Nasopharyngeal Cancer, Oral Cavity and Lip Cancer, Carcinoma of Kidney, Uterine Cancer and other cancers.

The formula can be used by itself or in combination with chemotherapy, radiation therapy, and/or surgery.

The benefits of Canelim (Ping Xiao) are:

Main Ingredients:
– Radix Curcume (Turmeric root, Jang huang) is an excellent natural antibiotic, while at the same time it strengthens digestion and helps improve intestinal flora. It purifies the blood and stimulates formation of new blood tissue. It cleanses the channels of the subtle body and promotes proper metabolism, correcting both excesses and deficiencies.

-Herba Agrimonia (Rosaceae, Agrimonia eupatoria) has anti – inflammatory and diuretic properties. Data from in vitro and animal studies suggest that agrimony may be useful against certain bacterial and viral infections, for tumor growth inhibition, diabetes, and hypertension.

Clinical studies:
1) The First Hospital attached to the Fourth Military University has pursued its application in the therapy of malignant tumor for over 20 years. Looking into the observed 500 cases, it concludes that Canelim/Ping Xiao can not only greatly relieve symptoms and improve quality of life, but also disperse major suffering from malignant tumors.

2) A statistical data of 24771 patients with different types of cancers show
that total effective rate varies from 53.2% to 89%. Some of them are: Nasopharyngeal Carcinoma 89%, Cervical Cancer 81%, and Bone Tumors 75%.

3) Zhang Wenli, a clinician in radiotherapy department of Yun Nan Tumor Hospital, reported that according to the 668 clinical cases from 1994 till now Canelim/Ping Xiao capsule manifests high efficacy of 89.67% in the treatment of mastopathy, in which optimum effect in mammary lobular hyperplasia, breast pain and pimeloma of breast reaches up to 93.31%.

4) Shaanxi Trditional Chinese Medicine Institute has put Ping Xiao/Canelim capsule into the treatment of all forms of cancers, leading to an efficient rate 64.5% among 180 patients.

5) In Longhua hospital, Shu Guang hospital and Rui Jin hospital, Shanghai, 150 patients who are suffering from malignant pulmonary cancer have been treated with Canelim/Ping Xiao capsule and a close observation has been performed. As a result, this drug shows an evident improvement in clinical symptoms and an 82.86% total effective rate.