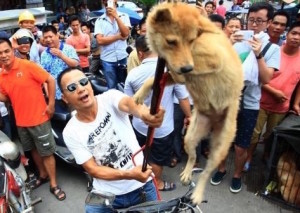 I am reposting the article I received from Avaaz.org , a 44-million-person global campaign network that works to ensure that the views and values of the world’s people shape global decision-making. (“Avaaz” means “voice” or “song” in many languages.) Avaaz members live in every nation of the world; our team is spread across 18 countries on 6 continents and operates in 17 languages.

For the Yulin dog meat festival, some dogs are stolen from their owners and beaten or bled to death. Then they are hung upside down from hooks, a slit cut from their anus and skin ripped off their bodies, and sold to be eaten.

The suffering must be unbearable — new research shows that in terms of emotion, dogs’ brains are much like ours, something dog owners and lovers understand well. When we see dogs for what they are — living beings with thoughts and feelings — the torture they endure at this ‘festival’ becomes inexcusable.

Already thousands of Chinese citizens have spoken out against the festival, but authorities won’t act until they see how badly it’s hurting China’s global image, which they’ve been working hard to improve. That’s where we come in. Let’s show the Chinese government that the world cares about this puppy slaughter and wants them to stop it immediately!

When our numbers are great enough, Avaaz will take out ads, work with influential celebrities, run the first independent national poll on dog-eating in China, and put this issue on front pages everywhere until Chinese authorities act. Add your name to the petition below with one-click and tell everyone:

As citizens across the globe deeply disturbed by the abuse and consumption of dogs at the Yulin festival, we strongly urge you to ban it immediately. Millions of Chinese citizens support legislation to stop the dog meat industry, and we join their call to end this cruel trade.

Thanks to brave Chinese activists, the festival gets smaller each year, and Yulin authorities eventually withdrew their sponsorship of the festival and even banned their employees from attending.

Momentum is building. If millions of us raise our voices now, we can save thousands of pups from unimaginable torture.

The Yulin festival isn’t a centuries old tradition — it was started in 2010! And many argue that it was created mainly to boost meat industry sales.

Time is running out — the festival is in weeks. Sign the petition above with one-click on the link, then forward this to friends and family — let’s make this huge!

Our community has campaigned against the most cruel bull festival in Spain, against the discarding and killing of male baby chicks in Germany, and against terrible conditions on farms in Spain and France. Now it’s time to speak out for man’s best friend, and get this puppy slaughter stopped for good.

TODAY’S TIP: When speaking up against this horrible tradition please keep in mind that dogs and cats are not the only animals that are killed for their meat. Goats, cows, pigs, sheep, chicken, fish, and other seafood are all living beings, just like us. They just happened to get a physical body that is different from ours.