↓
Home→Life Style→Legs up the Wall! Viparita Karani – an Asana that Gives Youth and Health

Legs up the Wall! Viparita Karani – an Asana that Gives Youth and Health

“There is a miracle cure which does not allow (lunar) nectar to burn in the fire of the sun”.
( Hatha Yoga Pradipika on Viparita Karani ) 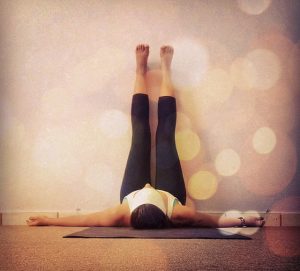 As you know, in hatha yoga there are a number of asanas called “royal”, due to the fact that in addition to a powerful healing and rejuvenating effect, they have the greatest psychophysical benefit associated with redirecting the flow of energy.

Its name is often translated as “Bent Candle Pose”. Taken literally, viparita means inverted and karani means in action. That is, everything that happens in our body and mind in the usual vertical position (standing or sitting) changes its direction to the opposite. According to yoga masters and many doctors, most of us benefit from being in an inverted position for a certain time.

The classic yoga treatises state that the regular practice of Viparita Karani Mudra brings youth to the body and mind. They say that, when we stand on our feet, we grow old, while in Viparita Karani, we become younger. 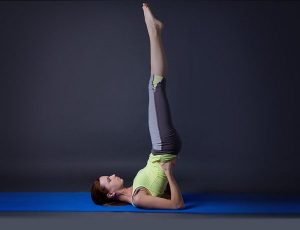 Almost any inverted position contributes to the outflow of lymph, reducing swelling of the limbs, relieving tension in the pelvic organs, knees, joints and, of course, improving the blood supply to the brain. Viparita Karani (in its basic version) is a fairly simple asana accessible to most people. The peculiarity of Viparita Karani also lies in the fact that it can be practiced separately as an addition to regular classes (for example, as a restorative practice after air travel or a busy day) or as an independent figure for the purpose of yoga therapy.

There are many positive physiological and therapeutic effects of Viparit Karani:

There are various options for its implementation: from the usual short retention of the posture with support on the wall to retention for several hours, which leads to deep meditation, which is able to cleanse the body and consciousness at all levels and even raise the Kundalini energy. The most detailed description of the variants of Viparita Karani can be found in Swami Sivananda in “A New Look at Traditional Yoga Therapy”.

Performing the basic form of Viparita Karani for 3-5 minutes a day will generally improve the body. This form is very simple.

The order of execution of the basic form of Viparita Karani

Lie on your back and put your feet on the wall, using it as a support.

Raise the pelvis to the desired level (you can use folded towels placed under the lower back).

If it is difficult to raise the lower part of the body, leave only the legs raised.

Finish with a Savasana

After Viparita Karani Mudra, Shavasana is obligatory performed. Gita Iyengar emphasizes that Savasana must be performed even after a short or simplified version of the pose. With a longer and more complicated version, Savasana requires, in her opinion, the same amount of time as the stay in Viparita Karani took.

“In the beginning, the body should be kept upside down for only a short time. The duration can be gradually increased day by day. After six months of daily practice, wrinkles and gray hair will disappear.”

Of course, if you want to achieve such a serious rejuvenation of the body in such a short time, you need to perform the asana in a more complex form, using additional visualization and feeling the prana current.

The procedure for performing a complicated form of Viparita Karani

This modification is significantly similar to Sarvangasana (Shoulderstand), so the entrance to the asana is almost the same.

Lie on your back. Hands on the floor, along the body, palms up. Legs together and extended forward. Relax.

Inhale deeply and raise your legs to an angle of 90 degrees relative to the floor, then continue to move, raise your pelvis. Legs should be straight and be slightly behind your head. To help raise the pelvis, use your hands with your elbows on the floor. Support the pelvic bones with your palms.

The legs remain straight. It’s better to keep them perpendicular to the floor, but if it’s difficult for you yet, move a little towards the head. Feet together.

When the asana is fixed, perform “khechari mudra” (the tip of the tongue touches the upper palate just behind the front teeth).

Breathe deeply with your belly, without tension. Relax so that the pelvis rests comfortably on the palms.

The holding time is better to start with 1-2 minutes, then gradually increase.

In the final version of Viparita Karani, the ability to hold bandhas is important. Bandha (literally means bond, fetter, or “catching hold of”) is a kind of internal mudra described as a “body lock,” to lock the vital energy into the body.
Of particular importance is the ability to relax as well as breathing, which should be even and calm. 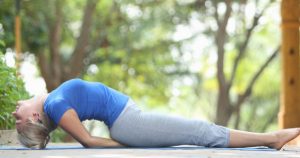 Inhale, as you exhale, lower your lower back to the floor, then your legs. All movements are slow, it is desirable to lower the legs straight. After exiting the asana, it is important not to rise quickly. You need to lie still for a while in Savasana and then perform a backbend as compensation, for example, Matsyasana (the pose of the king of fish).

Despite the huge positive effect of Viparit Karani, it is necessary to pay attention to the existing contraindications such as: