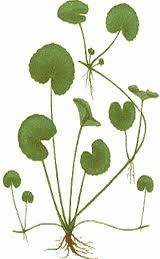 Gotu Kola (Brahmi) is a renowned rejuvenative herb for the brain and nerves in Ayurvedic medicine. It is traditionally used to promote the intellect, enhance mental performance, and support proper function of the nervous system. Brahmi is said to improve concentration, memory, and alertness. It is a natural blood purifier and helps support clear, healthy, skin and lustrous hair.

Brahmi (Gotu Kola) is a tonic and rejuvenative for Pitta. At the same time it calms Vata and reduces excessive Kapha.

Uses:
Brahmi has been used for hundreds of years for the treatment of the following diseases:

Dandruff
Brahmi oil replenishes the hair roots. If Brahmi oil is applied each night before going to bed, it will cure all dandruff problems and also make hair stronger.

Hair Loss
Brahmi is renowned in Ayurvedic medicine for the growth of hair. Its antioxidant properties allow the proper nourishment to reach the hair roots and thus promote their growth. Brahmi is an essential component of many herbal oils. Using such oils makes the head cool, as well as allows the hair to grow luxuriantly and with luster. The oil also prevents split ends and discoloration of the hair.

Insomnia
Brahmi is a cooling agent. When applied on the scalp in the form of oil, Brahmi relaxes the brain and induces a good and restful sleep throughout the night. One Ayurvedic recipe for treating insomnia is as follows: brahmi, vacha and amalaki powders are made in equal proportions. This powdered mixture is to be consumed thrice a day in the dose of one teaspoon. The powder can also be taken dissolved in a cup of water or milk.

Brain Tonic
Perhaps the most major use of Brahmi is in the treatment of several mental problems in humans. Taken on a regular basis, Brahmi helps to increase the concentration of humans and improves their memory and retention capacity. Regular use of the Brahmi oil is effective in treating mental imbalances, emotional disturbances, and also in the prevention and cure of geriatric mental problems such as amnesia and Alzheimer’s. Brahmi vati, an important Ayurvedic preparation containing Brahmi along with jatamansi (muskroot) and serpagandha (rauwolfia) is used as a brain tonic.

Venereal Diseases
Brahmi has antibacterial properties. A paste of its leaves is applied on syphilitic sores. This helps the sores heal quickly. Regular application of the paste of brahmi leaves can treat the syphilis completely.

The following are some Ayurvedic preparations in which Brahmi is the main ingredient:

Brahmi Ghee: Brahmi is boiled in pure cow’s ghee (clarified butter) along with some other herbs. This preparation is known as Brahmi ghee. Brahmi ghee is taken orally in one teaspoon amount twice a day on an empty stomach for people who are suffering from amnesia.

Brahmi oil: Brahmi oil is used for application on the head. Besides Brahmi, this oil can also contain amalaki, camphor, etc.

Precautions:
An excess of Brahmi may cause headaches or temporary loss of consciousness. In large doses may aggravate itching.

TODAY’S TIP: A cup of Brahmi can be taken with honey before meditation.