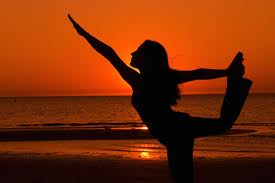 Yoga is a common term in our culture today, and yoga classes can be found in every city or neighborhood. Most people identify yoga with the physical postures that are the most evident side of the system. Eventually, most that look into yoga will come into contact with its more spiritual practices, such as mantra and meditation.

India’s culture is among the oldest in the world, and yoga is a gift handed down to us. It is so much more than a workout as we tend to view it today. Classical yoga looks at the whole human being, which is not only body, but also the mind and soul.

Yoga postures (asanas) were originally developed by monks who spent hours at a time in meditation. They developed asanas to train the body to counter cramps and stiffness caused by long periods of sitting.

Yoga is first and foremost a science of self realization. Its concern is spiritual practice to take us beyond the sorrow and ignorance of the world. Yoga provides the key to knowledge of our true nature beyond time, space, death, and suffering.

TODAY’S TIP: Yoga knows no limits. You are never too young or too old, never too sick, too weak, or too stiff to practice. Every time we consciously breathe we are doing pranayama, every time we think about something experiencing love we meditate (See also Yoga posture for your dosha and Sun salutation).