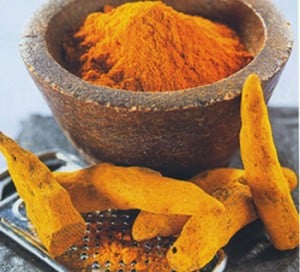 Turmeric (Curcuma longa, Jiang huang, Haridra) is a perennial herb of the ginger family. It has been used in Southern Asia and the Middle East for millennia not only for culinary purposes. Ayurveda and Chinese medicine use it as an anti – inflammatory, to treat digestive and liver problems, skin diseases and wounds, arthritis, ulcer, flatulence, bloody urine, bruises, colic, chest pain, menstrual difficulties, hemorrhage, and toothache.

Curcumin, the compound that makes turmeric yellow, is also a powerful antioxidant that helps to neutralize free radicals. It also reduces inflammation in the body and stops platelets from clumping together to form blood clots.

– As a natural pain killer.
– For gastrointestinal discomfort and other digestive disorders.

– For colitis and diarrhea.
– For strengthening cartilage and bone structure.
– As natural treatment for arthritis and rheumatoid arthritis.
– As an antiseptic agent for cuts, burns, and bruises.

– As fat metabolism promoter in weight management.
– As a natural liver detoxifier.
–  In the treatment of psoriasis, eczema, herpes, and other inflammatory conditions.

-As a gargle for sore throat and cough.

-in cosmetics: modern beauticians also take advantage of the many benefits of this magical plant. Golden spice (turmeric) along with saffron and rose is one of the main components of Kesharadi oil, which contributes to the radiance of healthy and beautiful skin.

*This site contains affiliate links to products. We may receive a commission for purchases made through these links. However we recommend you only high quality products that we personally believe in.

Precautions: If you are pregnant, have gallstones or obstruction of the bile passages; acute jaundice, hepatitis and diabetes talk to your doctor before taking turmeric.

Modern research suggests that turmeric is effective for following conditions:

-It affects cancer during initiation, promotion, and progression of the tumors (Aggarwal BB, Kumar A, Bharti AC. Anticancer potential of curcumin).
-It may prevent and slow the progression of Alzheimer’s disease by removing amyloidal plaque buildup in the brain.
-It has shown promise in slowing the progression of multiple sclerosis in mice.
-It boosts the effects of chemo drug paclitaxel and reduces its side effects.
– Promising studies are underway on the effects of turmeric on pancreatic cancer. -Studies are ongoing in the positive effects of turmeric on multiple myeloma.
-It has been shown to stop the growth of new blood vessels in tumors.

TODAYS TIP: Be careful. Turmeric is bright yellow and stains the skin and everything it touches, like your toothbrush or pajamas.