Why Yogis do not Eat Garlic and Onion. 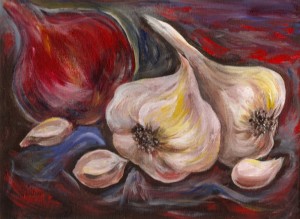 The Vedas include onions and garlic in the list of products unfit for humans because despite some benefit, they cause heavy damage to health and impede spiritual development.

History of the emergence of garlic on planet Earth:

The sacred texts (Vishnu Purana, Shiva Purana, Mahabharata) explain this in the story of the churning of the ocean. Tradition says that onions and garlic emerged from the saliva and blood of the demon Rahu, who fraudulently took possession of the drink of immortality, intended for the gods. Lord Vishnu cut off the insidious demon’s head, which became the dark planet Rahu. Drops of saliva and blood fell to the ground, and out of them rose onion and garlic. They are descended from a demon, and therefore strongly prompt the animal nature of man.

Ayurveda explains why onions and garlic are harmful.

Onions and garlic excite the lower nature of man, making him aggressive and blunting his natural sensitivity. When mixed with the nectar of the gods, garlic and onion may have some medicinal properties. Nevertheless, they strongly affect the lower chakras. That is why those who seek spiritual elevation avoid these foods. See also “How food affects the mind“, ‘Sattvic, rajasic or tamasic life“.

Garlic causes burns of the mucous membranes of the esophagus and the stomach, generating a severe spasm that, in turn, leads to weakness and malfunction of the digestive organs.

You may say, I have been eating garlic all my life and have never felt a spasm. You are right. You cannot feel the devastating effect of garlic on the esophagus, but it does not mean that it is not happening. If you are constantly eating this product, then over time, the nerve endings will lose sensitivity. Try to eliminate garlic from your diet for six months, and then eat a clove. You will feel the symptoms of pancreatitis: belching, and pain in the upper quadrant, where the pancreas is. However, it is not pancreatitis, but the response of your autonomic nervous system to the burning effect of garlic.

In the eighties, Bob (Robert) Beck discovered that garlic has a detrimental effect on the brain. Later he learned that many philosophies warn against the use of onions and garlic. Dr. Beck explained that as far back as the 1950s, aviators knew that garlic reduced reaction time by two to three times when consumed by pilots taking flight tests. This is because the toxic effects of garlic desynchronize brain waves. “The flight surgeon would come around every month and remind all of us: “Don’t you dare touch any garlic 72 hours before you fly one of our airplanes, because it’ll double or triple your reaction time. You’re three times slower than you would be if you’d not had a few drops of garlic.”

You can also verify this if trying to eat garlic before any intellectual work. Your ability to concentrate will lessen. Garlic taken before sports game will strongly inhibit your reaction as well.

The Taoists realized thousands of years ago that plants of the alliaceous family were detrimental to humans in their healthy state. In his writings, one sage Tsang-Tsze described the Alliums as the “five fragrant or spicy scented vegetables” – that each have a detrimental effect on one of the following five organs – liver, spleen, lungs, kidneys, and heart. Specifically, onions are harmful to the lungs, garlic to the heart, leeks to the spleen, chives to the liver and spring onions to the kidneys.

Tsang-Tsze said that these pungent vegetables contain five different kinds of enzymes which cause “reactions of repulsive breath, extra-foul odor from perspiration and bowel movements, and lead to lewd indulgences, enhance agitations, anxieties and aggressiveness,” especially when eaten raw.

Nor is garlic always seen as having entirely beneficial properties in Western cooking and medicine. It is widely accepted among health care professionals that, as well as killing harmful bacteria, garlic also destroys beneficial bacteria, which are essential to the proper functioning of the digestive system.

Instead of onions and garlic – ginger, turmeric, and asafoetida. 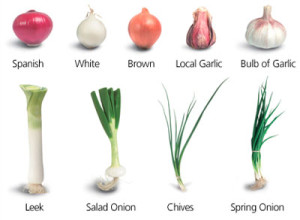 Abandoning onion and garlic is not difficult. For their antiseptic properties – use ginger and turmeric. For taste and smell – use asafoetida (powder resin of the Apiaceae family plant), it has a smell and taste similar to garlic, but is useful for digestion (in very small amounts). See: Twenty Ways Ginger can Serve you; Turmeric-the Yellow Wonder; and Asafoetida-for Better Digestion and Circulation.

TODAY’S TIP: In the “Laws of Manu” it is said that man never, under any circumstances, should take the following six things: onion, garlic, mushrooms, leeks, as well as pork and rooster meat. They also say that if garlic has touched some food or even lied next to it this food is considered to be polluted due to the strong demonic energy it radiates.
See also “The three Reasons Ayurveda does not appreciate eggs”.