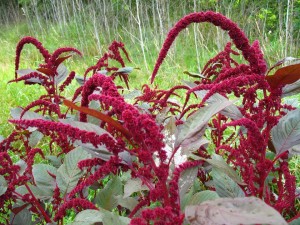 Mara – is a Sanskrit word meaning “death”, a – “not, without”. So it turns out that AMARANTH literally means denying death, or rather, granting immortality.

It might be related to the word AMRITA (drink of the gods, which grants them immortality) – “Mrita” – death, the prefix “a” – denial.

Amaranth is a moderately tall, broad-leafed, bushy type of plant that grows about six feet in height and produces a brightly colored flowery head containing a very large number of seeds (up to 60,000). These seeds are source for amaranth cereal and flour. Like quinoa, buckwheat, and millet, amaranth is not technically a grain, but because it is enjoyed in meals like other true grains, it is usually referred to as such.

Botanical Family.
Amaranth is a member of the Amaranthaceous family of plants and therefore is a relative of beets, Swiss chard, spinach, and quinoa. Before 1998, these plants were believed to belong to the Chenopodiaceous family of flowering plants, also called the goosefoot family. The more recent gene-based APG system (1998) and the APG II system (2003) have included this plant in the family Amaranthaceous.

History.
Amaranth, an ancient crop originating in the Americas, was used as a high-protein grain or as a leafy vegetable. Grain amaranth species have been important in different parts of the world and at different times for several thousand years. The largest acreage grown was during the height of the Aztec civilization in Mexico in the 1400’s. The past two centuries grain amaranth has been grown in scattered locations, including Mexico, Central America, India, Nepal, China, and Eastern Africa. Amaranth was an integral part of many ritual actions, which used paint made from it.

Rediscovering of Amaranth.
Research on amaranth by U.S. agronomists began in the 1970’s. In a 1977 article in Science, amaranth was described as “the crop of the future.” It has been proposed as an inexpensive native crop that could be cultivated by indigenous people in rural areas for several reasons:

The root of mature amaranth is a popular vegetable with a milky taste. It is white and alkaline and can be cooked with tomatoes or tamarind gravy.

Leaves previously scalded, or fried can be added to salads, sauces, and casseroles.

In addition to the wonderful culinary properties possessed by amaranth oil, it contains a number of unique substances, trace elements, and vitamins, which benefit to the organism cannot be overestimated. Amaranth oil is a known source of Squalene – a substance that captures oxygen saturation of the tissues and organs of our body.  Furthermore, Squalene easily penetrates through the skin into the body and is a powerful immune stimulant. Preparations containing amaranth oil may reduce the amount of cholesterol in the blood and protect the body from the effects of radiation exposure due to Squalene – a unique substance in its composition.

Squalene has been found in 1906. Dr. Mittsumaro Tsudzhimoto from Japan isolated it from deep-sea shark liver extract, which was later identified as Squalene (from Lat. Squalus – shark). In 1931, Professor, University of Zurich (Switzerland), Nobel Prize winner Dr. Klaur proved that this compound lacks the 12-hydrogen atoms to achieve a stable state, so this unsaturated hydrocarbon captures atoms from any sources available to it.

Squalene is used in cosmetics, and more recently as an immunologic adjuvant in vaccines. Squalene has been proposed to be an important part of the Mediterranean diet as it may be a chemo preventive substance that protects people from cancer.

Modern research has revealed the presence of Squalene in small doses in olive oil, wheat germ oil, and rice bran. However, the same study found that the highest content of Squalene in the amaranth grain oil (several times more than in the deep-sea shark liver).

TODAY’S TIP: Because it is a non-grain food, amaranth, along with quinoa, buckwheat, and millet is a good source of nutrition for those who are grain intolerant and for those who observe Ekadashi fast, when grains are not recommended (See Ekadashi).