Is God a Vegetarian?

If we think about it carefully, we will realize that there can only be one God, because the supreme is singular. Even when there are two or more very great souls, one is still greater than the others, otherwise He would not be considered God.

This Supreme Being possesses unlimited qualities and has therefore an unlimited number of names to describe them. Just as one person can be labeled in many different ways (e.g., husband, father, son, doctor, visitor, homeowner, one who likes pears, one who has blue eyes and so on), so too God has thousands of names, e.g., Krishna (All Attractive), Jagadisha (Protector of all), Madhava (Knowledge Filled God), Narayana (The Refuge Of Everyone), Ananta (The Endless Lord), and Hrishikesha (The Lord Of All Senses).

Religions are just different ways to serve the same Supreme Being. Due to the fact that we are all different, God gives us an opportunity to approach Him in a way with which we are comfortable. In accordance with the type of relations to God (including no relationship at all) that was developed in our previous lives, we are born into a particular culture and family prone to a certain tradition.

Some traditions are more concentrated on repentance, some on glorification of God’s greatness, while the Vedas state that souls (jiva atmas) are parts and parcels of the Super Soul (Paramatma) and every such part has its unique eternal relationship with its Source, the Supreme Personality.

The word “personality” is very significant. One’s personality can be described in terms of their appearance, character and habits, pastimes etc. 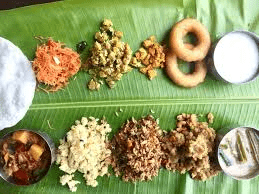 In this article, I would like to discuss only one feature of Krishna’s personality: what the Supreme God likes to eat.

In Srimad Bhagavatam 10-24-26, the Supreme God directly instructs His Devotees:

Within his means, the devotee should arrange to offer Me sugar candy, sweet rice, ghee (clarified butter), rice-flour cakes, various sweet cakes, steamed rice-flour dumplings filled with sweet coconut and sugar, wheat cakes made with ghee and milk and covered with sugar and spices, yogurt, vegetable soups and other palatable foods.

Let many different kinds of food be cooked, from sweet rice to vegetable soups! Many kinds of fancy cakes, both baked and fried, should be prepared. And all the available milk products should be taken for this sacrifice.

In Caitanya Caritamrta Madhya 15-207-218, such a feast is described as follows:

First, three manas of cooked rice – almost six pounds – was poured onto a big banana leaf. Then the whole stack of rice was mixed with so much yellowish and fragrant clarified butter that it began to overflow the leaf.

There were a number of pots made of the bark of banana trees and the leaves of the keya plant. These pots were filled with various cooked vegetables and placed on all sides of the leaf.

There were about ten kinds of spinach, a soup called sukhta, which was made with bitter nimba leaves, a pungent preparation made with black pepper, a mild cake made of fried curd, and buttermilk mixed with small fried pieces of dhal.

There were unlimited quantities of fruits and various roots.

There was a soup made with fried urad dal and mung dal, defeating nectar. There were also sweet chutney and five or six kinds of sour preparations, beginning with badamla.
Sweet rice mixed with ghee was poured into an earthen pot and mixed with bananas, condensed milk and mango.
Other preparations included a very delicious churned curd and a variety of sandesa sweetmeats.

In Caitanya Caritamrta Madhya 14-25:
The prasadam sent by the King had been offered at the Balagandi festival and included uncooked milk products and fruits. It was all of the finest quality, and there was no end to the variety.
There were curds, fruit juice, coconut, mango, dried coconut, jackfruit, various kinds of bananas and palm-fruit seeds.
There were also oranges, grapefruit, tangerines, almonds, dried fruits, raisins and dates.
There were hundreds of different types of sweetmeats and various types of condensed milk.
There were also papayas and oranges, and also crushed squash. There were also regular cream, fried cream and a type of puri made with cream.
There were also the sweets known as hari-vallabha and sweets made of flowers. There were lotus-flower sugar, a kind of bread made from urad dhal, crispy sweetmeats, sugar candy, fried-rice sweets, sesame-seed sweets and cookies made from sesame seeds, and sweets made with fused sugar.

There were sugar-candy sweetmeats formed into the shape of orange, lemon and mango. There were yogurt, milk, butter, buttermilk, fruit juice, a preparation made of fried yogurt and sugar candy, and salty mung dal sprouts with shredded ginger.

There were also various types of pickles – lemon pickle, berry pickle and so on. Indeed, I am not able to describe the variety of food offered to Lord Jagannatha.

Advaita Acarya, meanwhile, offered on the home altar all the dishes. That only was not here!

Dishes were divided into three portions. The first portion was beautifully laid out on golden plates and was meant for Lord Vishnu. Two others laid out on whole banana leaves, which were collected from a special palm tree. This palm tree produced at least thirty-two bananas from a branch, and they were all very sweet.

The two palm leaves, as well as the plates of gold, were full of wonderful dishes: slides of crumbly white rice, poured with yellow melted butter on top; spicy aroma came from vegetable puree and bitter melon cooked with vegetables. There were five varieties of bitter melon, and all of them – nectar taste!

The eggplants were fried with the fresh leaves of the tree, and the salad was made from spinach with pieces of ginger. Nearby stood an amazing dish of peas, which were pre-wiped and dried in the sun, and many more spicy and tasty dishes – everything is simply impossible to name.

And how many sweets! Banana flower sweet sauce and fruit puree with milk; wonderful sweets made from coconut pulp with cottage cheese and small cookies in sugar – all this in huge quantities! Sweet balls and coconuts rose up slides, and condensed milk with rice biscuits was next to it.

Sita Thakurani prepared five or six sour dishes and a splendid sour sauce, peeled masha and lentil cookies, and fresh banana cookies. Hundreds of plates of banana leaves were full of various vegetables. Large and roomy, these plates were very strong, and therefore nothing flowed out of them and did not fall out. In a new clay bowl, they spread out sweet rice, seasoned with melted butter, and here were three clay jugs filled to the top with condensed milk.

As we see there are such a variety of vegetarian dishes that we can enjoy new once every day and be free of violence, ignorance, and passion.

TODAY’S TIP: Via the Holy Scriptures or through His partial incarnations (Prophets),  God gives instructions to all seeking Him regarding what to eat. Krishna encourages His devotees to cook the above recounted dishes with love. Then they must offer these food to the source of everything – Him. God is the creator and proprietor of everything, so He does not need anything material  from us. The only part of the food He takes is LOVE. After the offering, the food becomes RRASADAM (the mercy of God). Such sanctified food is karma-free. The Vedas state: if one takes Prasadam only, ones body becomes spiritual, ready for returning back to God.