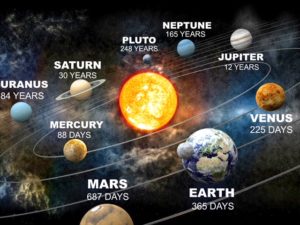 Due to astronomical laws, the planets Mercury, Mars, Venus, Jupiter, Saturn, Uranus, Neptune and Pluto periodically change the direction of their movement from the point of view of the terrestrial observer and move backwards. Astrologers call such a planet retrograde. Retrograde means “going backwards”. The reason for the backward motion is that an inhabitant of the earth and the planet move at different speeds around the Sun. It can be compared to the situation when passengers on a train look at another train going in the same direction, but slower. It seems to them that the other train is going back. The backward movement of the planets works in a similar way.

The planets have their own time frames and frequency of retrograde.

During the period of retrograde people might experience problems in the sphere of manifestation of this planet. For example, during the period of Mercury retrograde, problems arise in speras of communication, information, and commerce. Commercial indicators may decrease, sales may go down, and agreements may be violated. This is an unfortunate time for the signing of contracts and buying new things. Failures in the operation of communications and computer equipment are becoming more frequent at that time.

Taking into account the periods of retrograde motion of the planets can significantly facilitate life, if we know in advance which area of our life is going to be affected and do not plan for this time of serious matters in the corresponding sphere. 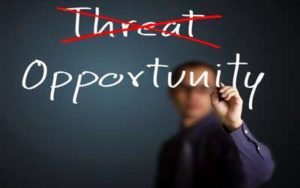 Retrograde planets in the birth horoscope
Astrologers do not recommend paying too much attention to retrograde planets, trying to improve their qualities, since even hard efforts will not significantly improve the situation. It is more effective to pay attention to strong planets with positive qualities in our chart.
Exceptions are when the ruler of the sign of the Ascending Node is retrograde. This means that the karmic task of this current human life is associated with this planet and the sphere of its competence.

From the point of view of karmic astrology, a retrograde planet indicates mistakes and unresolved issues in past lives in the spheres of government of this planet. Retrograde planets make a person move back to yesterday, to last month, and to last year. They also cause a movement back to previous lives, the memories of which are carried over into the present incarnation.

These memories represent certain events that were significant enough in a past life to have an impact now. Wherever a retrograde planet appears in the horoscope, a person continues trying to resolve previous circumstances that still are unfinished.

With each of the retrograde planets, a person will have to face challenges that they did not solve in past lives.
Venus retrograde will cause problems in the field of love and / or money. Mercury retrograde will make us learn how to interact with people and correct mistakes in relationships and communication.
Mars retrograde will bring difficulties in correctly applying one’s energy, activity, and sexuality.
Saturn retrograde may cause difficulties in career, in proving ourselves in society and so on. Problems with courts are possible as well.
Jupiter retrograde, indicates that in the past a person used power and authority incorrectly. In this life, it will be more difficult for them to gain respect and fame. Such people experience self-doubt and are often arrogant towards others.

Solving the problems of the social planets Jupiter and Saturn is more difficult than the personal planets of Mercury, Venus and Mars, although problems with the latter are felt more clearly, since they affect the sphere of personal relationships.

What does it mean to solve the problems associated with retrograde planets?

Each planet represents one of the karmic tasks. To solve a problem means to find a new solution, to correct a mistake made in the past. For example, in a past life, a person refused love or used the love of their partner for selfish purposes. In this life, a person will receive the opposite situation: they will be betrayed by their loved ones or they will suffer financial losses. What will be the person’s reaction to such events? If they feel offended, their lesson will not be learned, and the situation will repeat.

Mercury
In 2021, Mercury will traditionally be in retrograde position three times:

Mercury is responsible for communication between people, the transfer of information and logical thinking. Accordingly, during the time when the planet will carry out retro movement, problems can be traced both in personal and professional relationships. The negative impact of Mercury retrograde on technology is also to be expected. In the above periods it is better not to buy expensive things.

Periods of Mercury retrograde are very favorable for analyzing our own life. We can plunge into memories, but not for self-criticism and lamentation, but for sober analysis of mistakes and achievements.

Jupiter influences education, jurisprudence, philosophy, social sphere and charity. During the reverse movement of the planet, it is worth suspending the implementation of plans related to these areas, since they can fail.

Retrograde Jupiter has a good effect on intuition, so, from July to October 2021, we can rely more on our inner voice.

Astrologers’ advice is that at this time it is worth paying a lot of attention to work and study, since Saturn is the planet responsible for self-improvement, discipline and power. Actually, retrograde Saturn can help one move up the career ladder and achieve new success in professional life.

This period in the calendar can be marked in red by people of creative professions and all those who want to realize their creative potential. Retrograde Neptune will be very favorable for generating interesting ideas, finding original ways to solve problems and, of course, engaging in creativity.

At the same time, retrograde Neptune can play a cruel joke with our imaginations: bring too stormy dreams or provoke a deceptive impression about people, situations, and projects.

Uranus has always symbolized dramatic changes and new opportunities. The retrograde nature of this planet will bring good luck to those who will be ready for grandiose upheavals in their lives and will not be afraid to take on new projects.

Conservatives who do not allow novelty into their lives can suffer from the retrogradeness of Uranus: they will face internal struggle and new, unusual challenges.

According to astrology, Venus is a symbol of feelings, love and mutual understanding between people. During the period of retrograde, conflicts or disagreements may arise between loved ones, jealousy and misunderstandings flare up in couples. Therefore, at this time, you should be very careful when starting new close relationships.
Celebrating weddings is also not the best idea for the Venus retrograde period.

During the period of Venus retrograde, it is very important to devote more time to loved ones and relatives, because care and devotion are key to healthy relationships.

TODAY’S TIP:
The complexity of mastering a retrograde planet is that, when a problem arises, a stereotypical reaction from the past is “turned on” without our conscious awareness. A person’s task is to find a new solution, instead of reproducing the previously learned algorithm. Otherwise, similar problems in life will not only repeat but become more complex.