↓
Home→Astrology→Maha Dasha – What Should We Know about Planetary Periods

Maha Dasha – What Should We Know about Planetary Periods

One of the simplest applications of astrology in our lives is to know what planetary period we are currently living in. Any computer program can give us this information, then we may be willing to adjust our lives to the requirements and challenges that this period presents us with and realize the bonuses that it can give.

In Vedic astrology, there are many systems of periods, the main one is Vimshottari dasha. This is the sum of the periods of 9 planets, which lasts for 120 years – the maximum life span in the Kali Yuga, which began just over 5,000 years ago. This period, in turn, is divided into 9 Maha dasha – sub-periods of individual planets.

Note that the Moon and Sun are also called planets (grahas) in Vedic astrology. 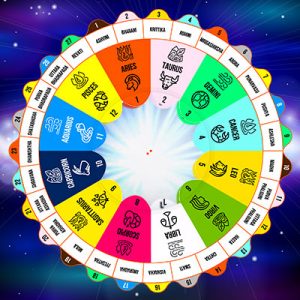 This system of periods (maha dasha) is also called nakshatra-dasha, that is, a system of periods based on nakshatras (constellations through which the moon passes). A person’s life begins with the period of the planet in whose nakshatra the Moon was at the time of birth. Example: if the Moon at the time of birth was in Jyestha (the ruler of Mercury), then life begins with the period of Mercury.

The duration of the periods is also always the same, except for the period from which life began. It may be shorter due to the fact that the Moon was in the middle or end of the nakshatra. Each person begins an individual period from the moment of birth, which is under the control of one planet and lasts a certain number of years. It is this planet that will be the most influential in this period of life.

Maha dasha ( period when a certain planet rules) activates all those houses with which this planet is connected, accordingly, events take place in these specific areas of human life.

Dos and don’ts for each maha dasha.

You need to be organized. Get up and go to bed with the Sun. Be proactive and take the initiative.

Despite the tendency to worry, we should calm down and relax. Do not puzzle over the future, do not look back – try to live here and now.

This period brings discontent. A person is dissatisfied, even if he has enough of everything. One should learn to be satisfied in all aspects of life. If the position of Mars in the birth chart is strong, then the quality of the period is less pronounced.

Fasten your seatbelt and don’t be afraid of anything, as this is a period of turbulence. Shaking will be without fail. You need to be active. Do your own thing, not paying attention to the opinions of other people, and be mostly silent. Don’t give up until you get results.

Money comes in an amount sufficient for life, but no more.

It is considered great luck if the period of Jupiter falls on childhood and adolescence (brahmacharya).

During this period, time slows down. What seems bad will eventually be good.

You will have to suffer, but not “fatally”.

You need to learn to play with everything, remaining spiritual inside and keep in touch with God. If attachment to something arises, then the connection with God immediately disappears.

During this period, you need to become like an actor in a theater or cinema – just watching what happens in life.

During this period, there is no stability – fate throws you up and down several times. Living is like walking in the dark. You have to learn to live in the flow.

Often the last 3 years of the period are the most difficult: breaking up partnerships, changing jobs, etc.

During a period of Mercury people can be arrogant and will not tolerate any other opinion. Basic rules – relax, be flexible, be in the flow.

Since at this time a person is very open to the influence of external energies, it is better to lie low for a bit, not to show off, not to look for trouble. During the period of Ketu comes retribution for the mistakes made. If we in the previous period of Mercury made mistakes, messed up, disobeyed ethics, the consequences of this will manifest in the period of Ketu and can be very painful.

During this period, prepare and expect romantic relationships, creative activities and laziness. In the Kali Yuga, this is a very dangerous period. People want everything to be easy for them. Often people only want to take and not give anything to the world that can easily lead to degradation.

In the Venus period, we tend to make two kinds of mistakes: we either push too hard, or we relax too much, and in both cases we lose.

What we need is to calmly do our job.

Kapha dosha may increase. Therefore, it is difficult to start something new. During this period, any progress is very slow.

If the owner of the period in the horoscope is weak, then you need to look at the sub-period. If the planet of the period is strong, then it is enough to follow the rules of the main period.