Origin, Structure and Goal of Vedas 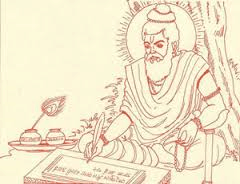 “Veda” translates as knowledge. It is principally different from the worldly knowledge though. While modern science gives us tons of information on many subjects, the whole picture of life is missing. For example, in physics we have several levels of understanding. Newton’s physics describes the laws of classical mechanics. The other level is the Einstein theory, which describes alternate reality, where classical formulas like gravity not necessary work. Next level is quantum physics. All attempts of classical scientists to describe the reality in whole yield no results yet. While being overwhelmed by information we lack wisdom that allows us to see the source of everything. Vedas is that holistic kind of knowledge, that explains everything that happens and the connection of it all. It shows also the source of all kind of energy that acts here.

Vedic wisdom cannot be discovered by empiric experience, it can only be transmitted from higher reality per the primer vibration of the space. All Vedic ideas already exist, one needs only a specific tuning of heart to perceive them. Some individuals with certain purity of heart were able to decode the subtle laws that rule the world. Rishi (wise man) literally means one who sees. The rishis didn’t write the Vedas, they wrote them down without adding anything in a tradition called parampara. Parampara means going from the top to bottom. Vedas emanated from the primer source which is God. Rishis retranslate them from generation to generation, from teacher to disciple. They do not change anything; they act like postmen, only delivering what was sent.

Initially, Vedas were transmitted orally since at that time humans didn’t need to write anything down to memorize it. Once heard, everything was imprinted forever. Although we proudly believe that written language is the sign of civilization, it seems to be the sign of degradation.

How Old are Vedas?

Vedas, as information, always have and always will exist. The books, where Vedas were written down, however, have certain age. Vedic scriptures (Shastras) appeared on Earth about five thousand years ago with the beginning of Kali yuga, the age of quarrel and degradation (see Kali Yuga). But the knowledge they contain has neither beginning nor end. Interestingly enough, modern historians believe that five thousand years ago the history of humanity had begun. According to Vedas however, our history started its final period at that time (See Yugas, Vedas about End of World). The history of Vedic culture ended and the history of the modern man began – a man who has no idea who he is and believes that an ape is his ancestor.

Vedas were written down by rishi Vjasadeva or Vjasa (one who divides into parts). Vedic knowledge emanates from a single source like rays from a light source. Initially Vedas were brief and highly concentrated, but since humankind kept losing its ability to understand complex ideas, it was necessary to give more and more explanations and comments. See also How old is Ayurveda.

Sanskrit – the language of Vedas

The language of Vedas is called Sanskrit. This is the most complicated language ever. Why should primitive civilization need such a refined sophisticated and complex language? Primitive people usually use gesture language and even when talking, use minimum words. Individuals who seek the higher truth, who feel all the subtle nuances of the nature, however, would develop a refined language such as this.

First all knowledge was concentrated in the sound of OM. Om is called bija mantra. “Bija” means seed, something from what everything else grows. By meditating on the holy sound of Om, spiritual souls could realize the diversity of the absolute truth. Om has three sounds A, U, and M. The sound A stands for God (the Highest), U is His energy and M is the union of God and His energy, which is the source of all.

Formally Vedas are organized in three groups:
– Shruti (what is revealed)
– Smriti (what is remembered)
– Nyaya (logic consequences)
In fact, any process of study includes these stages: listening, understanding, and using.

Smriti (Puranas, Ethihasas and Vedangas) is written in simpler language then the initial Vedas. It aims to teach the same truth as shrutis do, but in form of tales, stories, and chronicles.

– Puranas are stories illustrating all aspects of life. All of them are saturated with universal sacred wisdom about the source of everything and our relation to It. Puranas can be written in three modes (righteous, passionate, and ignorant) so every living being could understand them and progress no matter which stage of evolution they are on (see Gunas, Three cosmic forces).

– Etihasas have two mega scriptures Mahabharata and Ramayana. Mahabharata with more than hundred thousand verses is the largest poem on Earth. Both scriptures are extremely interesting and contain everything: politics, love, action, philosophy, and spiritual message about the absolute truth, the nature of the soul and its relation to God.

Vedanta Sutra takes logical consequences from what is revealed. It has only one text that consists of only 250 lines outlining the whole Vedic wisdom.

Vedas are gigantic by size. It is impossible to study all of them even if one makes it their goal in life. Furthermore, they contain a multitude of instructions addressing individuals who are on different stages of spiritual path that might seem controversial for an inexperienced student. That’s why they should always be studied with guidance of a spiritual teacher. Moreover, the original texts accommodate information in a very compact form, which can be difficult to grasp for the average person without interpretation from said spiritual teacher.

The Essence of Vedas

There are “digests” that briefly summarize the main Vedic ideas. We can learn the first section of Vedas (shruti) by studying such works as Sri Isha Upanishad (eighteen stanzas with comments); and Bhagavad Gita (700 short verses). They present the essence of the four Vedas.

The second and third section of Vedas can be understood by studying Shrimad Bhagavatam (aka Bhagavata Purana). They cover such basic topics as creation, maintenance, and demolition of the universe, the source of all sources, cosmic hierarchy, and laws of material world presented in very interesting form. They also explain such a concealed theme as the private life of God and His incarnations, and a description of the spiritual world.

Inner structure of the Vedas

The inner set up of Vedas is based on key milestones of a human life. Every living being comes to this world to implement several main tasks.

In the beginning, almost all of us seek material well-being. Later on we are supposed to seek a philosophical explanation of that what is going on in this world. A mature person looks further to find and fulfill the individual mission they were born for. The following groups of scriptures respond to the corresponding longings of a living being.

Karma Kanda (law of action) deals with the material approach to life. Most of us look forward to getting some form of material gain out of life. The problem is that we don’t know how to do it without creating bad karma. When trying to take pleasure in the material world, we tend to do it in sinful manner. Taking short-time advantage we receive long – term consequences. The Karma Kanda section of Vedas teaches how to enjoy life without sinning. In brief, we should act in the world without regard to the fruit of action.

Gyana Kanda deals with the philosophical approach to life. Even if we managed to enjoy the world whilst remaining sinless, with time one realizes that everything in the material world, good and bad, comes to an end. Naturally the next stage of evolution is  the practice of a philosophical approach to life. What is the purpose of life, why does suffering exist, who has arranged it this way?

Gyana kanda serves the mind and intellect, which have differing needs from ones of the body. The immortal part of us cannot be satisfied with temporary things. This aspect of knowledge is covered in Upanishads. The main idea is that our immortal soul can be satisfied only with immortal things; and that besides the temporary material world there is an eternal spiritual world in which we must seek refuge.

Bhakti Kanda deals with aesthetic realization of the soul. While the philosophical approach teaches us to distinguish between consciousness and matter, the aesthetic approach provides an access to true spirituality. At this point, a living soul realizes that all beings are individuals, who can be in relationship with each other. Scriptures teach how an eternal living being can build and maintain an everlasting personal relationship with God as well.

Vedas and stages of life

Each of the four Vedas has four subdivisions: Samhitas, Brahmans, Aranyaks, and Upanishads. Throughout his lifetime, a living being is supposed to study deeper aspects of the Vedic truth.

Samhitas are hymns; they are studied by young disciples.
Brahmanas contain description of rituals and moral rules. They are studied by Householders during the most socially active stage of life. Aranyaks deal with meditation and speculation and are meant to be studied at the next stage of life, when one begins retiring from external activities.
Upanishads are studied when a person is wise enough to receive a philosophical message about the absolute truth, the nature of the soul, and its relation to God. They contain transcendental revelations about the soul, God, and higher reality.

TODAY’S TIP: Dual (material and spiritual) content of Vedas is parallel to the duality of the human nature. First we must learn to act sinless in the material world. When we are firmly established in Sattva (righteous life), our spiritual practice will lead us forward to eternal reality (see Features of a Sattvic Person).